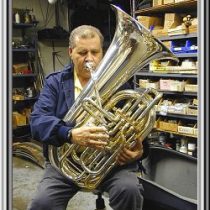 The Recording Musicians Association of Los Angeles publishes a bi-annual Directory of recording musicians, studios, composers and useful information for the members. Each year they recognize a few of the prominent musicians who passed away. Both Tommy Johnson and his wife Pat died in the period of less than a year. She was an important violinist in our business and both are to be recognized in the 2008-09 issue. I was asked to write the tribute to Tommy. The following is what I wrote for that feature.

It’s been over a year since my dear friend Tommy Johnson passed away. In that time a lot has crossed my mind about our special and complex relationship. He was certainly one of the most important people in my whole life. I could never thank him enough for letting me be his sub and for his support of my projects. His life and accomplishments were amply displayed last winter at his memorial concert and there is little I can add. But here are a few special remembrances and feelings I have about Tommy.

In 1971, when I was a young college teacher back east and looking for a place to finish my graduate work, I heard about this amazing tuba player in Los Angeles who was a great teacher and did all the first-call studio work. I chose USC so I could study with Tommy. My first summer with him confirmed that he was not only a great player but a great teacher and human being. He inspired me for sure!

While Tommy did thousands of movies in his long career and left a great legacy in that genre (notably John Williams’ “Jaws”), people often forget the important role he played in television. The ‘60’s and ‘70’s were a golden age for television and almost every show had an orchestra. Many were sort of big bands with strings. Tommy played tuba (and often bass trombone) in many of those shows and did much of the live TV and Awards shows in that era–and beyond. It was an age of cartoons, too. Tommy’s tuba was the choice of almost all of the film composers of that time. He had a solo flair,

solid time and seemingly unlimited technique. Writers exploited that and when they needed comic moments, elephants, klingons, fat detectives, (even simulated flatulence)–they wrote for Tommy and his tuba. For many years, if a composer wrote a tuba solo and Tommy wasn’t available, it would be rewritten for bassoon or other instrument. There are thousands of examples of his tuba solos in TV that await some serious archiving.

Regarding “Jaws”, I can’t tell you how many times I (and tuba players around the world) have had to play that theme. It’s a staple of the pops orchestra repertoire and it’s a damn hard tuba part, scary to play, and often missed (and sometimes destroyed) in concerts. Tommy sight read it!

Shortly after I finished my studies at USC they hired me to teach brass quintets and some of the tuba students. Every Monday night, for 30 years, Tommy and I taught the Tuba Master Class together. We had a wonderful sharing of the duties and cemented our friendship through endless discussions about the business, life and music. To me he was always “the teacher”. His teaching is legendary and many of the world’s great tubists were Tommy’s students.

SOLID. That’s the word I find best sums up his tuba playing. From gigs with the LA Phil to the great studio orchestras to big bands, he laid it down. I played better sitting next to him–we all did. The orchestra was well anchored when Tommy was in the tuba chair. SOLID.

One of my fondest memories was going on a Hanna-Barbera session with him. It was fast and furious, one-take recording, and Tommy was flawless. Imagine a loud, edgy, big band bass-bone part, 4 bars rest (to change horns) followed by a lovely tuba solo. I later got to sub for him on those gigs and knew what the standard had to be.

He was one of the all-time great tuba players and his role in making the tuba a virtuoso solo instrument was profound. He was the first “modern” tuba player in the studios. The technical, range and solo limitations put on the tuba before Tommy were not his world. He could play anything those pesky trumpets, flutes, cellos and bassoons could play and spent a lifetime proving it. Tommy was a big leap forward.

During his career a few brass players in our business stood out for their masterful playing. All we needed to know were their first names, among

them: Vince, Dick, Lloyd, Charlie, George, Manny, Uan, Malcolm and, of course, Tommy. He was the most recorded tuba player in history. I doubt if anyone will EVER equal his numbers again. He was a unique man of his time, the recording business during his career and, of course, his enormous talent.

Tommy subbed for me for the final concerts at the Bowl in 2006 (his wife Pat was Asst. Principal 2nd Violin). On Friday morning he played an HBO rehearsal, in the afternoon went to Fox to play “The Simpsons” then went back to the bowl for a grueling concert that repeated on Saturday and Sunday. I attended that last concert. Tommy was really hurting but played great. Afterwards several other brass players and I helped him to his car with his instruments. The next day he went into the hospital for the last time. He played to the very end–as I am sure he wanted.

Tommy Johnson made two well-known recordings of “Tubby the Tuba”: one for Disney when he was a young man; and one, late in life, with Manhattan Transfer. Tommy lived the life of Tubby. He came out from behind the orchestra and said to the world, “ I can sing too, listen to me!” And we all did.