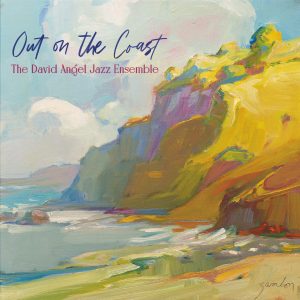 Purchase OUT ON THE COAST Here

DAVID ANGEL is one of the most respected composers/arrangers on the West Coast; however, he is virtually unknown to the general public. That is why tuba and bass trombone master JIM SELF decided it was time to rectify that situation. He brought together The David Angel Jazz Ensemble to record OUT ON THE COAST, a gorgeous three-disc anthology of Angel’s music. The David Angel Jazz Ensemble grew out of the rehearsal band that Angel began in 1969. Over the years, the group featured many West Coast jazz giants. Angel’s current 13-member ensemble of top-notch players were more than happy to participate in this project. Recorded right before the pandemic hit, the band laid down all 22 tracks in just four days. OUT ON THE COAST features 15 original compositions by Angel and his arrangements of seven standards. Angel wrote so many great charts, it was difficult to narrow them down to fit on one disc, so he culled 22 tunes from his extensive oeuvre and burned them onto three discs. The music ranges from swinging to symphonic, from Latin-tinged to jazz waltzes to West Coast cool. Written over many years, the compositions and arrangements on OUT ON THE COAST provide a very satisfying glimpse of the prolific output and brilliance of David Angel, who never sought out and has never received wide public recognition. This project should change that, and it’s about time.

“Thrilling thirteen piece big band jazz” David Angel Jazz Ensemble – OUT ON THE COAST:   Listeners who just love it lively will welcome this new thrilling thirteen piece big band jazz release with open ears… it’s a TRIPLE-CD, so you will be fully occupied for a few hours (I suggest you listen to one CD at a time, so you can savor each and every note).
David arranged or composed all 22 tunes, and even played tenor sax… the players were Phil Feather: alto sax, sop. sax, piccolo, flute, alto flute; Gene Cipriano “Cip”: alto sax. sop. sax, clarinet; Jim Quam: tenor sax, clarinet; Tom Peterson tenor sax, flute, alto flute; Bob Carr: baritone sax, bass clarinet; Jonathan Dane: trumpet, flugel horn; Ron Stout: trumpet, flugel horn; Stephanie O’Keefe: horn; Scott Whitfield, trombone; Jim Self: tuba, bass trombone; John Chiodini: jazz guitar; Susan Quam, string bass and Paul Kreibich: drums… and they will dazzle you on tunes like the jumpin’ “Ah Rite!“… full-bodied sound and high-energy playing from each and every one of them make this a tune that jazz DJ’s all across the globe will be plugging in regularly!
For a more mellow setting, you’ll find the band’s performance of Billy Strayhorn’s “A Flower is A Lovesome Thing” to be totally rewarding… what really stands out on this one is the exquisite pacing… not one note is rushed, but the song will hold you absolutely spellbound.Tuba and bass trombone meister Jim Self pulled all this together, and I can tell you right now that you won’t find a more engaging album in 2021 when it comes to jazz ensembles… that was especially true for my personal favorite of the 22 tunes offered up, the 14:50 “Moonlight“… a truly amazing performance!
I give David and all the players a MOST HIGHLY RECOMMENDED rating, with an “EQ” (energy quotient) score of 4.99 for this huge success.  Get more information on Jim’s BassettHoundMusic page for the release.
By Dick Metcalf, editor, Contemporary Fusion Reviews