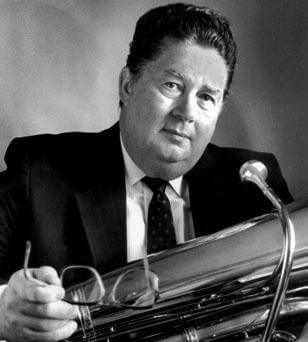 Distinguished Professor Phillips performed as tuba soloist throughout the world. His music career began as a teenager with the Ringling Bros. and Barnum & Bailey Circus Band. From 1950-­?71 he maintained an enviable freelance career in New York City, performing, recording and broadcasting with famous artists, conductors, bands and orchestras. In 1954, he was a founding member of the New York Brass Quintet. He served as personnel manager for Symphony of the Air, Leopold Stokowski, Igor Stravinsky, and Gunther Schuller. He was New England Conservatory Vice President for Financial Affairs (1967-­?71)...