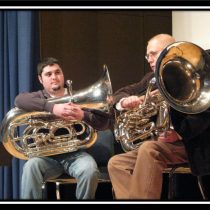 These two events were real highlights of my life and career as musician. They took place within 2 weeks of each other and put me in situations where I could demonstrate my best playing, composing skills and clinic/master class stuff.

Last summer I took my grandson Omar to Washington DC to see our nation’s capital (just as I had done at age 11). While there I decided to go to a rehearsal of The US Army Band (my alma mater) and to give a copy of Tour de Force for Wind Band to Col. Rotundi...